Today was a full on crazy pants kind of day. Basically, a very important letter I sent was being held captive by the post office in a series of unfortunate red tape and clerical errors. After too much time on the phone (I now think my co-workers think I am an angry person) the situation was finally straightened out … but it did launch me into a full on stressed mode for a while. Which leads me to this … the avoidance of stress eating.

One of my biggest flaws has been that I am a stress eater. This was never so unfortunate a flaw as this past summer when I was studying for the Bar Exam. Basically, during that time period even the coolest of cucumbers has her stressed induced moments. And I had my fair share of mine. So I stress ate. I stress ate Ben and Jerry’s and Sour Patch Kids and fried rice with pineapple (a really bad guilty pleasure of mine because I could never stop eating the giant container).

One of my biggest goals since I started eating healthier has been to sever the connection between stress and eating. I try to tell myself that I cannot and will not eat my emotions. When I put it like that, it pretty much snaps me out of it. I don’t really want to be that person. At least not anymore.

Dinner tonight turned out really well. By the time I got home, I was well over my stress, but it was still fun to cook. My boyfriend lives with me and he is the true cook in our relationship, but I tend to do more of the cooking nowadays because he works long hours. I kind of love playing around in the kitchen and finding new recipes.

Tonight I made meat(less)balls in sauce over egg noodles with a side of broccoli. I kind of threw together a bunch of recipes I found online, but here’s what I did:

Mix 12oz. package of Lightlife Gimme Lean Beef with 1/2 cup breadcrumbs, 1.5 TBS parmesean cheese, and dashes of salt, pepper, garlic, and oregano. Put 2 TBS of oil in a casserole dish and put dish in oven while it preheats to 350F. When preheated, take out dish and roll meatballs to desired size and place in dish. Cook for approximately 20 minutes. Enjoy with red sauce over pasta. Delicious! 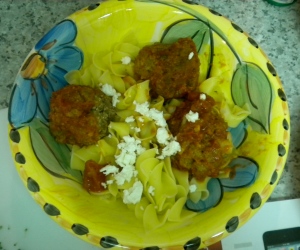 I tend to weigh myself on Mondays, and today I lost 1lb! This was pretty darn exciting seeing that my weekend wasn’t by far my best eating decisions ever. I went skiing with friends in the Poconos and we had a house stocked with lots of yummies. Still, I did my best to make good decisions and limit my portions, so I guess that combined with skiing paid off.

This was actually taken last year in the Rockies, but you get the idea.

But I digress, for dessert tonight, I was craving something sweet. I mixed a cup of Almond Honey Bunches of Oats with a few chocolate chips. I know that cereal is often way processed, but it is still a good way for me to get a lot of nutrition such as protein in. I’m don’t eat meat, so protein is pretty important to me.  Also, I find it best that when I am having a sweet craving only a few times a week, as I have been having, it’s best to give into them in moderation so that I don’t snap later in the week and find myself waking up in a pint of Ben and Jerry’s (see stress eating above).

What are your favorite sweet treats when on a healthy path?