How Not to Bake Cake Balls (in photos)

I keep hearing about Cake Balls. My friend Kelley told me they are going to be the new cupcakes. Well I love cupcakes. And I love the idea that Cake Balls are small, so you can have one, be satisfied, and be done. In theory of course. Pretty much the only thing I didn’t like about the idea of Cake Balls were the name. Yes, because I’m a 13 year old at heart.

I rarely bake sweets anymore – I used to all the time last year and then I would eat them and then I gained weight – but Chris’s two best friends were scheduled to arrive from TN last night. What better way to welcome them to the Northeast than with Cake Balls (don’t even think that’s what she said)?

I used this recipe and all was going well for a while:

1. Choose a boxed cake mix. Bake cake according to directions on the box.

I didn't mean to buy Sugar Free, but since I was mixing it with sugar-filled frosting and dipping in chocolate I figured it would be fine.

2. Crumble cake in large bowl as soon as it comes out of the oven. Watch to not burn yourself! 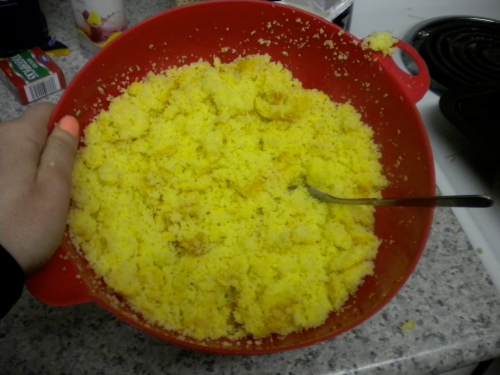 It felt a little wrong to crumble the cake, but it was fun.

3. Pick the frosting of your choice.

I recently realized how much I like vanilla frosting. 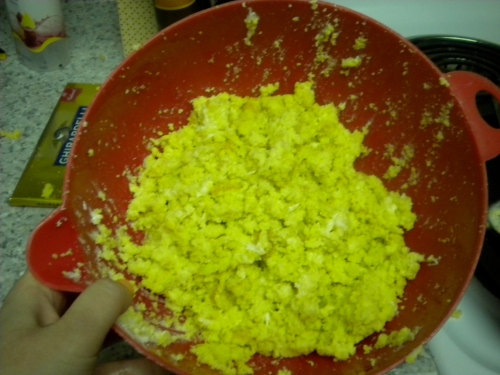 Where things get messy.

5. Put the bowl covered in the freezer for at least three hours. I think that this may have been one of my mistakes, as I only left it in for two. It would probably be best to just leave it in overnight to be extra firm. Also, try not to eat to much “Spooey” when waiting for the cake-frosting mess to set.

Spooey = Pretzels dipped in Frosting. Anyone else call it this?

6. When firm, take out mixture and scoop out balls using a melon scooper. Here the mess really starts. I didn’t have a melon scooper so I just made balls with my hands. I made the balls way too large. 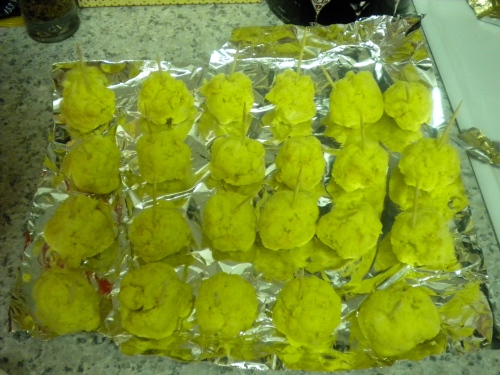 These are not melon ball sized.

7. Melt bakers chocolate in the microwave in a glass bowl. The recipe I used called for 3 oz. This was totally wrong. I probably needed 12 oz for the amount of balls the recipe produced.

I don’t have a picture, but just imagine what melted chocolate looks like.

8. Here the recipe calls for dipping the Cake Balls in the chocolate using either a fork or toothpick. I thought a toothpick would be nice, because then you could eat them off them later. Use the fork. The Cake Ball will not stay on the toothpick. Also, because I didn’t have enough chocolate the Cake Balls could only be dipped partially in chocolate or drizzled.

7. Put in fridge to harden. Do not give into your dog who thinks eating the Cake Balls would be a splendid idea.

In the end my finish product was suppose to look like this: 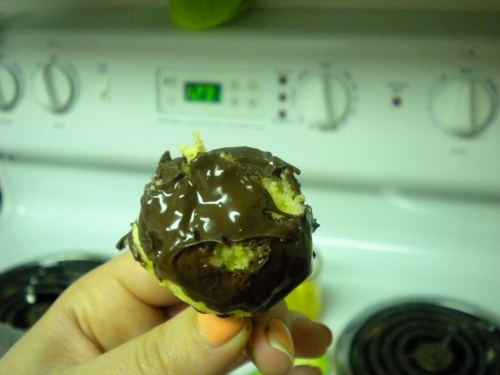 And yes, I was up past midnight ruining these babies. I think I should leave baking complicated treats to someone else and stick with cooking. 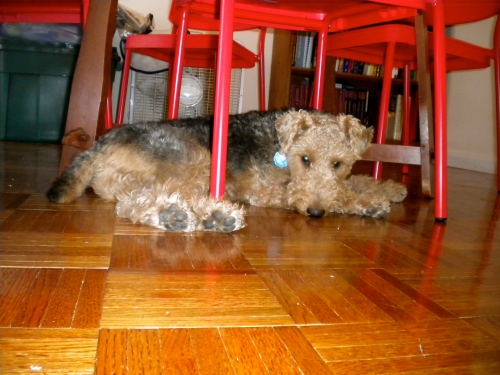 All that hard work for that? I'm exhausted!

This entry was posted in dessert, recipe and tagged baking disaster, Cake Balls. Bookmark the permalink.

4 responses to “How Not to Bake Cake Balls (in photos)”