My Weekend: The Relaxing plus Pear and Blue Cheese with Caramelized Onion Pizza

As I mentioned, my weekend was a mix of on the go and relaxing. Sunday began the relaxation. I started the morning with Pilates. Pilates isn’t super relaxing, but it is fun! I feel myself getting stronger every time, and it was a great way to start the morning.

After Pilates, I had a pretty chill day. I watched Friday Night Lights and cuddled with Hadley. Then Chris and I decided we hadn’t cooked in too long and decided to get creative in the kitchen. I have been wanting to try to replicate a meal I’ve enjoyed at California Pizza Kitchen, so we made:

– Fresh mozzarella cheese (I didn’t measure how much I used)

– Shredded mozzarella (I didn’t measure how much I used)

– Blue cheese (I didn’t measure how much I used)

I started by caramelizing the onions. To do so, I took a tsp of butter and melted it in a pan. Then I added half a sliced onion into the pan. I stirred the onions continuously until they were brown. Then I put them in a bowl while I prepped the rest of my pizza. 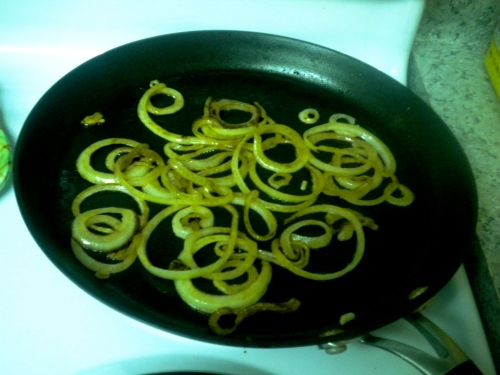 I took the pizza crust and covered it with thin slices of fresh mozzarella. I spread it out and left spaces.  I then covered the whole pie with shredded mozzarella.  I next sliced up the pear and covered the entire pie with slices of pear. Then, I added my caramelized onions. I next crumbled a small amount of blue cheese on top of the pears. I added salt, pepper, oregano, and garlic. 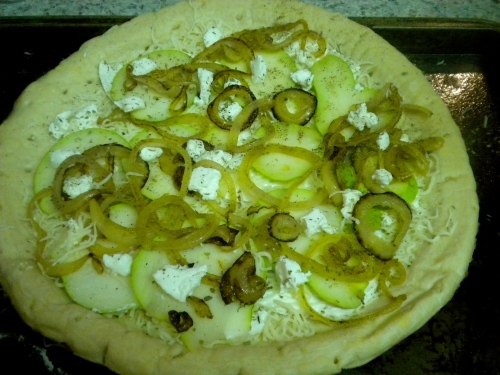 Before going in the oven.

I baked according to the direction on the pre-baked pizza. It ended up taking around 15 minutes. 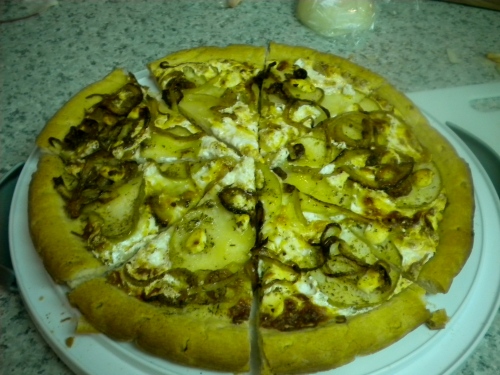 Out of the oven.

I topped the pizza with arugla mixed in a balsamic vinaigrette. I took a pretty picture of this with actual vibrant color, but because my blog doesn’t allow me to ever post truly good pictures, it will not load. Sad face.

The pizza came out really well. It was crispy and cheesy, but the pears and arugla added a certain freshness to the taste. I will be making this again.

What kind of toppings do you like on your pizza?

My Weekend: The On the Go

This long weekend was the right balance of on the move go and relaxation. Friday night started on the go. It was glorious out in NYC and in the sixties! I took the day off from exercise because my body was asking for it, but I felt so tempted to run outside. I ultimately decided it was a better idea to let my legs have a rest. Especially because I went out in these later that night:

My most favorite heels ever.

I went to dinner at the Corner Shop Cafe with Chris and friends. It was closed for a year and just reopened. Chris and I started out with their much loved on Yelp Mac ‘n Cheese. Maybe I’m not mac ‘ n cheese cultured, but I prefer my Annie’s. For dinner I had a tuna burger. Good but nothing over the top. If you add in the fact that the we waited about an hour and a half to be served, and they brought the meals out one at a time, I won’t be returning. Still, I was with good friends, so it was still fun. We ended the night dancing at a nearby lounge. I was happy I didn’t go running earlier in the day, because my legs would have never approved otherwise. It was fun to dance – I honestly cannot remember the last time I have gone.

Saturday was too fun. I spent the entire day in Lord and Taylor with my mom, aunt, and brother. We even ate lunch there! It turns out their food is yummy. My aunt teased me for taking pictures of my food, but this meal was pretty. 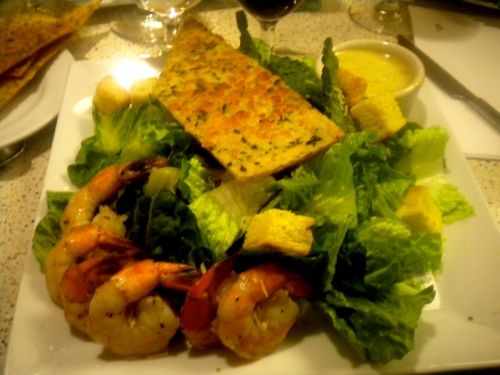 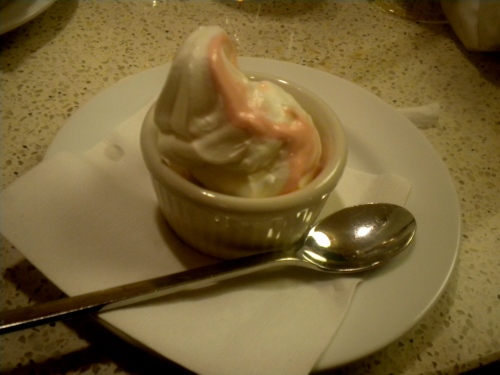 The waitress brought out complimentary mini yogurts for everyone.

We spent the rest of the day shopping, but were unsuccessful for the most part. Still, my mom managed to nab a pair of designer jeans  marked way down. I was proud of myself for not buying just to buy. I’m telling you, my teeny tiny closet is helpful sometimes.

We ended the evening joined by Chris and my cousin at Tavern on Jane. This place is great! I had a restaurant.com coupon to it, which made it even better. The menu wasn’t extensive, but everything we ordered was delicious. The place is small, but not tiny, and they were fine with the fact that we were super late to our reservation. We all shared a calamari app, which was yummy and not greasy at all. For dinner I tried out their seared yellow-fin tuna tacos. This time Yelp reviews didn’t lie. They were oh-so-good. I wish I had pictures, but the place was dark and my little point and shot refused to play along.

Perhaps the most fun part of the restaurant is that the table cloths are paper and they provide crayons so you can draw on it. We had enjoyed a very intense game of hang man, in which my cousin didn’t spell the word we were trying to guess correctly. We aren’t spellers in my family. I think more restaurants should let you draw on their table cloths!

It was so much fun to be out in the city with my family. Whenever my parents visit, we tend to eat in my apartment, so it was great to go try a restaurant with my mom, show her a new area of the city, and even get her to ride the subway. Successful Saturday!